We went to the “Magic of Harry Potter” concert this week and had a great time. There was certainly magic in the air as Theo was able to sit through nearly 2 hours of classical music past his bedtime. It was a sold-out show, and I got a kick out of seeing so many kids (mostly older kids) there, some wearing their Gryffindor scarves and holding their wands. Hopefully they had a good time too, and will consider going to the Symphony again in the future!

One of my favorite parts of the evening was watching Theo subconsciously/inadvertently moving his hands around to the rhythm of the music. In his music class at school, they have been learning about tempo and I could tell he was internalizing the concepts. At one point the trombone had a big solo and he moved his arms back and forth mimicking the musician playing the instrument.
I love this book that helps kids (and adults!) better understand classical music and the different parts of the orchestra. We checked it out of the library on a whim when we were going on a long car trip and enjoyed reading and following along with the accompanying CD which was a great audio aid. It introduces readers/listeners to general musical concepts, composers, genres, and each of the different families of instruments.

Now that you’re in the mood to demonstrate your knowledge of classical music and see it live in action, the next concert in the Lollipops family concert series is called Tyrannosaurus Sue: A Cretaceous Concerto and will feature two works, one of which is the titular piece: 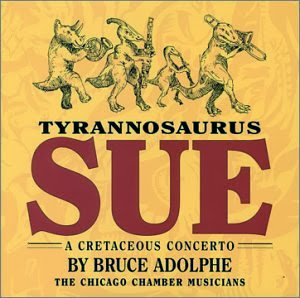 The other piece that will be performed is based on the book “The Story of Babar,” in an orchestral piece composed by Francis Poulenc, L’ Histoire de Babar.

My friend Aimee has done a lot of the prep work in finding books and albums from the library or iTunes to help her children get ready for the concert, and I love that kind of effort to help kids better understand the performances beforehand. I think it will make a big difference in their overall enjoyment of the experience!
Since I’m on the topic of music for kids, I also wanted to share a couple of our favorite non-classical book/music albums. Theo has the great fortune of being a child of parents who spent their adolescence during the 1990s. (If you know the song “Stay” by Lisa Loeb and can sing it in its entirety from memory, you too may be a child of the ’90s.) Luckily, Lisa Loeb grew up and had kids too and wanted to write music for them! This is our favorite one of them all which features original music as well as old-timey classics: 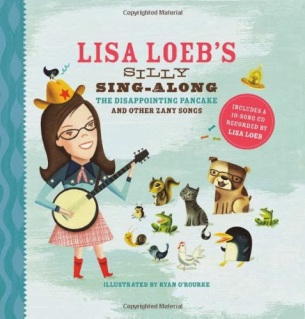 The songs are short, catchy, and clever enough for parents to enjoy (sample lyric to The Disappointing Pancake, about a wandering pancake’s misadventures, including to a baseball game: “The crowd yelled, ‘Batter, batter!’ He felt right at home…”). A bonus is that Steve Martin (yes, THAT Steve Martin) also plays the banjo on the songs which I just love b/c I am in love with Steve Martin and everything he does.
The other album that we really enjoyed when Theo was younger was this one based off of the books by Sandra Boynton:

My friend Maggie introduced us to this, luring me with the promise of hearing celebrities singing (Kevin Bacon and Meryl Streep, among others). The lyrics are taken right from the pages of Boynton’s books and are also short, catchy and cute, but not so cute that you want to claw your ears off.

There is tons of music geared towards kids, with varying degrees of annoyingness (see: “What Does the Fox Say?”) but when you can find something that you can both enjoy, it’s a huge win. Of course, introducing kids to “regular” non-kid music is also important, and I’m grateful for my husband for giving Theo a thorough education in The Beatles, among other bands. There’s nothing better than sharing things with your children and having them form an appreciation of something you love.