Yesterday we went to a lecture given by Grant Imahara, one of the “Mythbusters” from the Discovery Channel show of the same name. We have been big fans of this show for a long time, so this was truly a fun celebrity sighting for us. Grant’s talk explained some of the experiments and myths they had done on the show and Theo was very intrigued. After we came home, he wanted to watch some episodes and has been watching them on Netflix in true binge fashion ever since.

Grant spoke about how his background in electrical engineering enabled him to do cool things like build experiments for the show and build robots and other machines for movies. This blog isn’t really about product placement or specific recommendations, but these are a few relevant toys that Theo enjoys that I thought I would mention.
Snap Circuits
The set we have comes with different parts that when literally snapped together, create conduits for electricity that make “machines” (an alarm, a flashlight, a fan, etc). Some of the machines are still way over Theo’s head but the general theory of how different pieces relate to each other is cool. 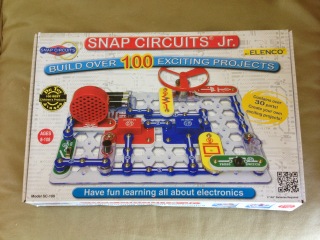 This toy got a fair amount of attention when it was a Kickstarter project started by a woman engineer who wanted to create a toy for girls to encourage them to explore science and engineering concepts. I was really interested and bought Theo a set (gender equality goes both ways). It comes with a storybook with characters which you follow to put together their “spinning machine” and is fun to read as you build. 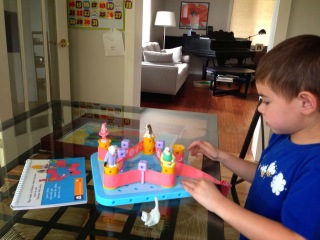 These are a set of alphabet and number blocks that all turn into robots. Yes, it’s that simple and they are awesome! Good for little fingers to manipulate and figure out how to switch them back and forth and they are really cute. Each letter and number has a unique design and look.