Of all the birthday parties that I’ve thrown for Theo through the years, this is one of my favorites. I chose a theme and didn’t just run with it, I marathoned it. For Theo’s 2nd birthday party, our theme was “The Very Hungry Caterpillar” by Eric Carle. I enlisted one of my graphic designer friends to help me create personalized party touches like the poster we hung on the door welcoming everyone to the party. 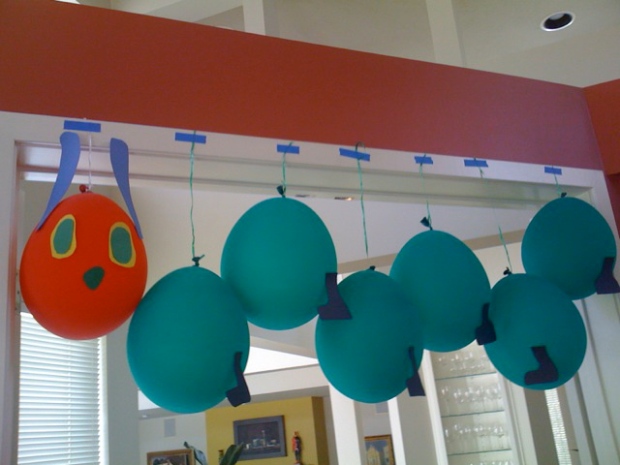 I have to note that this party occurred in 2010 before everyone knew about Pinterest. I did my pre-Pinterest best and Googled decorations around the theme. Check out the balloon-animal version of the caterpillar above. (We again held the party at Theo’s grandparents’ home due to the number of guests.) 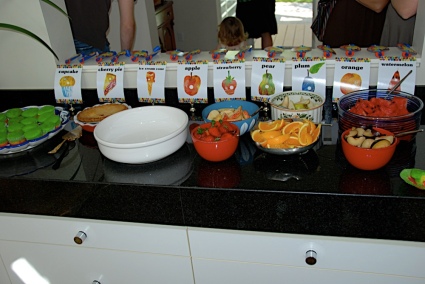 The food was a highlight. In the book, the caterpillar makes its way through a whole host of foods… and we had every single one of them at the party. I had identifying signs made for each food based on the illustrations from the book and placed them next to the food. For the cupcakes, I tried out a new technique where each layer of batter is dyed a different color and constructed layer by layer.

Instead of doing a Costco sheet cake this year, I went with a local grocery store to make the chocolate cake. I requested that they print on edible paper the book cover and to have a simple design with the words “Happy 2nd Birthday, Theo” on it. This is the cake I picked up. It was definitely not “simple” and was so crazy that I couldn’t be mad. It was a lesson learned in giving up artistic control over a main element of a birthday party. 🙂

Theo didn’t seem to mind and enjoyed eating it with gusto. He had broken his arm just a few weeks prior but having a cast didn’t deter him from using forks in both hands.

Continuing with the theme, the party favors were giant lollipops, similar to the ones in the book. The cute favor tags went along with it. I had so much fun planning and throwing this party and it was not the last time I used inspiration from a literary source! (See Theo’s 3rd birthday party.)

P.S. Two months after I threw this party, I was browsing in Target and came upon this display of themed party supplies. And a specific birthday card for a 2-year-old (not any other age). It’s like the party gods were tormenting me! Where were all of these things a few months before when I was creating all of my own personalized decorations??? 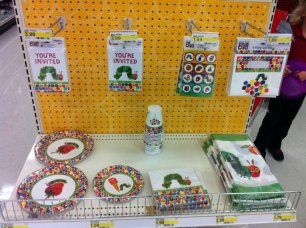