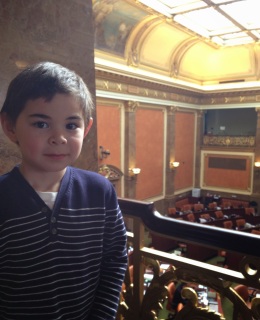 Feeling civic-minded today, the day of the State of the Union address by President Obama, Theo and I visited the Utah State Capitol to participate in “Democracy Day.” In particular, we were there in support of bills promoting preschool education for all children in Utah. A giant “Chutes & Ladders” board game was laid out in the main rotunda of the building and the kids could play the game. The ladders represented achievements and the chutes represented detractions in the lives of Utah children. I was interviewed by three reporters from local news networks, so we’ll have to see if I got any screen time during the evening news tonight (edit: I did; see below!). 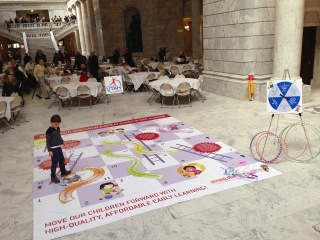 We also spent some time in the public galleries of the House of Representatives, where we could see the chambers where laws were made. They were not in session when we visited (the afternoons are spent in sub-committee meetings) but Theo insisted on staying to watch the one or two representatives who were working at their stations. We were also lucky that two school groups came in on a field trip while we were there and we got to eavesdrop on the teachers’ presentations (always in awe of teachers!).

The state Capitol is truly a beautiful building and I hold a lot of reverence for it. I may not always (okay, hardly ever) agree with what is decided upon within its walls, but am grateful to be part of a democracy.

Here is a snippet of an interview I gave on ABC4 News:

Here is an article in the Deseret News about the event: 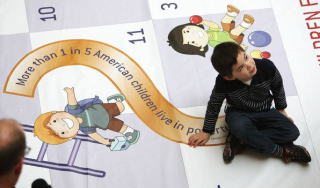 Consolidated coverage on this event on a Voices for Utah Children curated page — including a shout out to this blog!